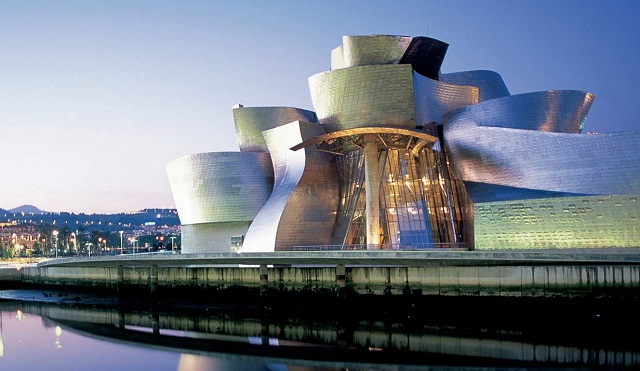 Bilbao - it is the largest and busiest city of the Basque Country, it has a population of about one million people.

You will certainly be impressed by his miraculous transformation from an industrial to a modern, developed city.

The most famous building in the city - it's a museum of Modern Art Guggenheim, the avant-garde of the XXI century monument, designed by architect Frank Gehry. Opening of the museum dramatically changed the face of the city, and also thanks to him that Bilbao has gained wide international fame. Bilbao was built on the river Nervión, which gives the city a special attractiveness and charm; you will have the opportunity to take a boat trip. During the tour you will visit the medieval historic part of town, you will see many monuments, such as the Gothic Catedral de Santiago, the Plaza Nueva, the Church of San Anton, built on the ancient ruins, the Arriaga Theatre built in neo-Baroque style and much more. You should definitely visit the Vizcaya Suspension Bridge (Puente Colgante), the world's first flying ferry, truly spectacular. And finally, if you love shopping, then Bilbao, and, in particular, the old part of the city will seem to you shopping paradise. You can find here modern big department stores and the charming little shops of fashion brands, where you can get to know new tendencies of fashion.