Coast of the Province Gipuzkoa 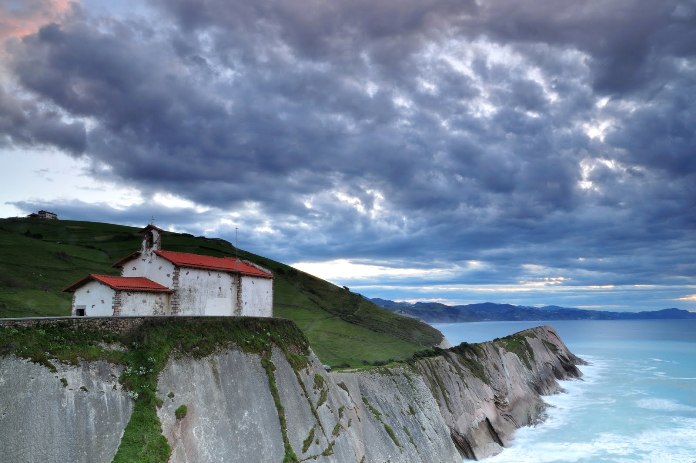 Gipuzkoa - one of the three provinces of the Basque Country,located in the north of Spain,

on the coast of the Cantabrian Sea (Bay of Biscay). This wonderful area of Spain is really worth seeing. Rocky coastline, beautiful white beaches, green mountains, charming fishing villages and raging ocean ... Although Gipuzkoa province is the smallest area in the Basque Country, it is the center of Basque culture. Here are preserved stone medieval buildings from 16-19 century. During the tour, we will visit with you the seaside village of Zarautz, Getaria and Zumaya, each one has its own unique charm.

This charming resort town is located in the Basque province Gipuzkoa . According to the documents, it was founded in 1237. In the old part of the city you can enjoy the beautiful masterpieces of medieval architecture, here a large number of historical and architectural monuments. This town will surprise you with its tranquility and well-groomed. But the main attraction of Zarautz - this is the wonderful beach which is the longest in the province of Gipuzcoa, its length is 2.5 kilometers. This small town in the north of Spain is one of the best and most famous for surfing. There are often held world championships in this sport, because here one of the biggest waves in Europe.

Getaria - this is one of the most picturesque villages of the Basque Country, located on the coast of the Bay of Biscay. Here everything is permeated with the spirit of the middle Ages. According to the documents of Getaria mentioned already in 1209, and numerous archaeological excavations prove that the town was inhabited by people in the days of the Roman Empire.

If you go up to the mountain of San - Anton, nicknamed because of its shape The Mouse of Getaria, Enjoy a wonderful picture - the vast expanses of the ocean and picturesque coastline. On the mountain there is a beautiful park, where it grows a large number of trees and plants. Until the 15th century it was an island, which later joined the Getaria with a small isthmus. Juan Sebastian Elcano - Spanish explorer, one of the most famous natives of Getaria. It was the first explorer in history to circumnavigate the globe, but his name is familiar to few people outside of Spain. Juan Sebastián Elcano was a member of Magellan's expedition; he was able to after the death of Magellan bring to Spain the only surviving ship of the fleet, thus completing the first voyage around the world.

Also in Getaria was born the famous fashion designer, the greatest couturier Cristobal Balenciaga. You can visit the museum, which is located in Getaria.

Zumaia - is a small fishing village on the coast of the province of Gipuzkoa in the Basque Country, located between the rivers Narrondo and Urol.

Of particular value here is a Geopark flysch Zumaia. These long continuous rock strata of rocks, known as the "flysch". They were formed over 65 million years ago; it refers to the period of time when a meteorite collided with the earth. This phenomenon is not only attracts geologists from around the world, and just people who love nature. It is particularly interesting to see the picture at low tide, when you open a stone striped bottom in the bay Sakoneta.

In the Zuloaga house you can get acquainted with the work of an outstanding basque artist Ignacio Zuloaga . In this small and intimate museum you can find his works, as well as the creations of El Greco and Goya