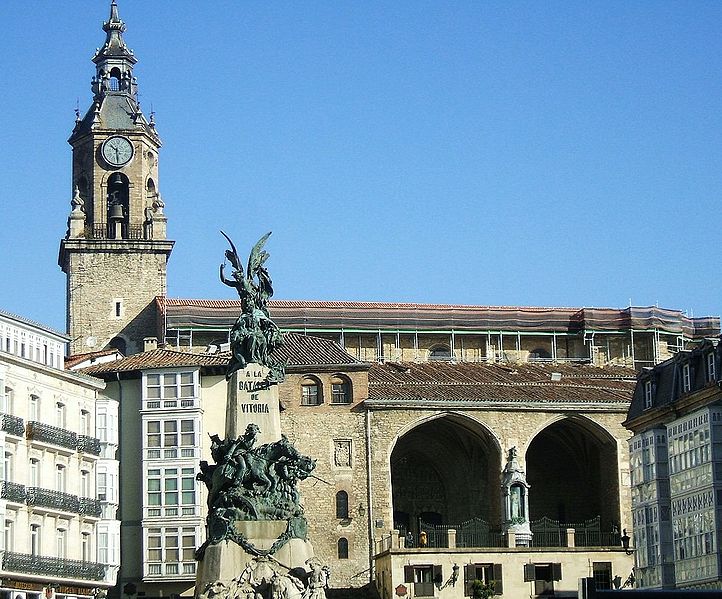 This is the official capital of the Basque Country. The city is located in the province of Alava and counts its history since 1181.

This is one of the cleanest cities in Spain, which in 2012 was awarded the title of European Green Capital. Although this small town is not a very touristic, it is worth to visit. Here is preserved virtually intact medieval town center with many squares, cozy little streets and boulevards. At each step you can see the magnificent architectural masterpieces. Medieval almond - sometimes referred to as the medieval center of the city, due to its shape, is framed by a green area and located on a hill. This is the oldest part of the city. We will begin to explore the city from the central square of the Virgen Blanca (Plaza de la Virgen Blanca), will continue to move through the small streets of the city, be sure to visit the Gothic Cathedral of Santa Maria. Work on the restoration of the Cathedral, which has been going on for a long time, attracted a lot of tourists and historians, who can see here how the building was created.

During a tour of the old town we can visit the fortress walls, Bibat (Museum of Archaeology and playing cards), Palaces Eskoriatza-Esquivel and Monteermoso, while not spending a lot of effort since in the highest part of the Medieval quarter. We will go up there on a modern and comfortable escalators. Curiously, the names of the streets of the Old Town, such as Kuchileriya, Herrera, Pintoreriya, Correr, reflect the activities of a craftsman (or cutlers, smiths, painters, postmen). From the square of the Virgen Blanca begins Dato, pedestrian and shopping area, the main street of the city, which is a great place for shopping.

Vitoria-Gasteiz is located near the famous wine district of Spain Rioja Alavesa. It is a gateway for the passage of the Basque Country in the region La Rioja. Therefore, we can make an interesting excursion to the winery to get acquainted with the wines. Wine is a part of life and culture of the area.
In 2014, Vitoria declared the gastronomic capital of the Basque Country.